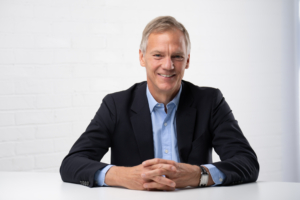 Stephen Reily is an attorney, entrepreneur and civic leader in Louisville, Kentucky. After clerking for the U.S. Supreme Court and practicing law, he founded IMC Licensing, a global leader in brand licensing that has generated over $6 billion in consumer product sales for the Fortune 500 brands it represents. He is also the co-founder of Curated Media and its fast-growing app ClickHer, which shares content by and for women.

An art collector and arts patron, he answered a call in 2017 to serve as Director of the Speed Art Museum in Louisville, and for more than four years he led the institution under a new mission to “invite everyone to celebrate art forever.” Under Reily’s leadership, the Speed introduced a new “Speed for All” free family membership for anyone for whom cost is a barrier to entry; initiated its first paid internships; issued its first annual Racial Equity Report, specifying the museum’s standing and commitments on staffing, acquisitions and exhibitions, programming, and more; presented over 20 exhibits, expanding the museum’s commitment to presenting both the work of artists historically underrepresented in museums and all of the arts of Kentucky; increased contributed revenue by nearly 50%; offered an “After Hours” event welcoming on average over 1,000 visitors monthly; and created “The Art of Bourbon,” the premier national nonprofit bourbon auction.

In 2017 he created the Reily Reentry Project in partnership with the Louisville Urban League and its leader, Sadiqa Reynolds, to support expungement programs for citizens of Kentucky. He serves on the Boards of Creative Capital, a leading grantmaker in the arts, the American Federation for Arts, the Greater Louisville Project, the James Graham Brown Foundation, and LHOME. Past Board services includes the Louisville Urban League, Muhammad Ali Center, the Speed Art Museum, the New Museum of Contemporary Art, the Downtown Development Corporation (Louisville), Christ Church Cathedral (Louisville), Louisville Collegiate School, American Life & Accident Insurance Co. of Kentucky, Inc., and Hardscuffle, Inc.

In early 2016 Stephen was a candidate in the Democratic primary for a seat on Louisville’s Metro Council representing the neighborhoods and small cities of the Highlands (District 8).  In a 7-person field he came in 2nd by 116 votes.  You can see read content/blog posts about that campaign and videos from it as well.

As the founder of Seed Capital Kentucky, a non-profit focused on building a more sustainable future for Kentucky family farmers and farm communities, Stephen spent several years working to develop the West Louisville FoodPort, a 24-acre, $56-million project designed by OMA, the architecture firm founded by Rem Koolhaas, to support the development of the local food economy. While the FoodPort did not come to fruition, the West Louisville Community Council, created as part of the FoodPort planning process, endorsed the Louisville Urban League’s Norton Healthcare Sports & Learning Center, which opened on the same site in 2021.

Stephen is married to Louisville native Emily Bingham, an historian, civic leader and author, most recently, of My Old Kentucky Home: The Astonishing Life and Reckoning of an Iconic American Song. They have three children. In 2022 Emily and Stephen were jointly awarded the Blanche B. Ottenheimer Award, the highest honor awarded by the Jewish Community of Louisville.