Some of you are lifelong Louisvillians who anchor your neighborhoods and extended families. Some of you (like me) chose Louisville as your hometown because it’s an amazing place to raise a family, start a business and give back. And some of you are newcomers, attracted by Louisville’s welcoming spirit and a feeling that it’s on the cusp of becoming one of the special, winning cities of the 21st century.

I have met you all as I have walked the neighborhoods of the Highlands over the past few months: the loving father at St. Raphael’s parish; the empty-nesters living near Cherokee Park; the teacher looking after her neighbors in Deer Park; and the young gay couple who know that the Highlands will respect and protect them.

The world is urbanizing, so is Kentucky, and so is Louisville – nowhere so much as in the Highlands. How we manage that process will determine who we are as neighbors, as parents, and as people who can push Louisville forward to its full potential.

That means we need neighborhoods that remain truly livable even as our streets become cut-throughs for traffic; a Bardstown Road that serves neighbors (and home-grown businesses) as much as it serves the visitors we welcome to it; and a city that honors our neighbors and embraces newcomers.

Among the candidates for District 8, I alone have a record of success in both the for-profit and not-for-profit space, building new businesses from scratch and creating jobs that make it possible to live good lives in Louisville.

Among the candidates for District 8, I alone have a 20-year record of public support for progressive Democratic candidates and causes that treat our fellow citizens with dignity and serve as the foundation for economic prosperity. People of Louisville know we can’t turn back if we want to succeed; just look at North Carolina.

That record is why I’ve received endorsements from groups like C-FAIR (Fairness), the Sierra Club and our firefighters.  And it’s why progressive heroes (and strong women) like former Lt. Gov. Crit Luallen, Sen. Denise Harper Angel and Rep. Mary Lou Marzian have endorsed me as well.

Like you, I love Louisville deeply.  And I love the idea of serving your daily needs, supporting your vision for the Highlands and working with 25 other council members to build a fairer, bolder, stronger Louisville together.

But some comments suggested that money is the answer – or that I think so.

Money can’t buy votes – just look at Jeb Bush. A 100-day race in a crowded field requires hard work AND resources, and I am deeply grateful for the broad and deep base of support I have attracted, from 40% more individual donors than any other candidate received. Just as I’m grateful for the endorsements I’ve also received, from C-FAIR, Louisville Professional Firefighters Local #345, Cumberland Chapter of the Sierra Club, and Crit Luallen.

For those of you who don‘t know me – or know me only because of my amazing wife Emily Bingham, whose family’s legacy I deeply respect – or who don’t know how hard I worked to become a Supreme Court clerk and successful entrepreneur, here’s where I came from:

I grew up as the youngest child in a big blended family. The three most important influences were my parents and my paternal grandmother.

My grandmother was the second woman in the 20th Century to win the Times-Picayune “Loving Cup” awarded to citizen leaders for unselfish service; that service included leading the League of Women Voters of the U.S. and efforts to reform politics in New Orleans in the 1930s and beyond. My father learned his independence from his mother. Primarily a businessman, he was tolerant and respectful of others in an age when many of his peers were not; an award-winning athlete himself, he never imposed expectations on his five sons to follow the paths he chose. He always told people what he thought. My mother modeled a life of service and looking out for people whom others were ignoring. Always sensitive and generous to underdogs, she volunteered with the homeless, the intellectually disabled, and AIDS patients. She led our state mental health organization when it forced the State of Louisiana to reform its own state mental health hospital. She built a health clinic in one of our most vulnerable neighborhoods. She did all this with a consoling and uplifting spirit.

I was raised to work hard, to give back, to embrace strong positions, and to remain always open to the perspective of people from every background.

That is why I am running for Metro Council. That is why I spent another 6 hours today knocking on doors and asking my neighbors in District 8 about their lives and needs – and asking for their support.

And that is why I’m getting it.

The people I meet on the campaign trail want strong neighborhoods in the Highlands and in every part of Louisville. I am proud to be building the West Louisville FoodPort, using our hunger for local food to feed our hunger for economic opportunity and health for everyone. Louisville will have a fairer, better future only if we work and walk together on this path.

What vision do we all share for District 8 and Louisville? The chance to embody Louisville’s welcoming spirit towards ALL people – our neighbors who already live here, the ones we will attract, and the employers who will flock to a Louisville that moves enthusiastically into a fairer, better, bolder future. Let’s build it together. 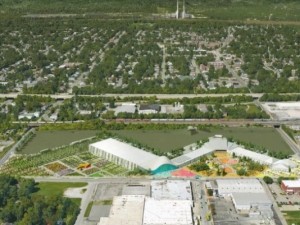 I’m proud and grateful for our many, many partners in this work, including the people of Russell, Shawnee and Portland, Mayor Greg Fischer, and a world-class model of public service on the Metro Council, Cheri Bryant Hamilton.

A job fair is scheduled for April 26 to fill positions for carpenters, electricians, laborers, landscapers, and other late summer construction jobs on the project.

I keep hearing complaints about the “bar corridor” of Bardstown Road – so I decided to see it for myself, and the 5th Division of the Louisville Metro Police Department let me tag along for a midnight ride last night.

Because it was an unusually warm Saturday, the night brought a range of activity, including:

– a drug arrest outside one bar;
– an ambulance tending a head wound after a bar fight;
– random traffic accidents;
– a domestic violence dispute with an unexpected plotline; and
– an apparently drunk driver who drove his SUV straight into Za’s Pizza Pub. 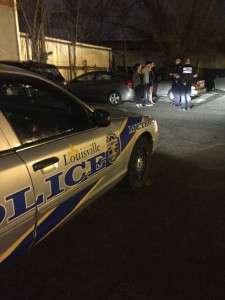 By the end of my shift, it was clear that Bardstown Road is now the place where the entire city comes to party – and that we are lucky to have LMPD officers working hard to keep the peace. As a Council member I will continue to look at issues through the eyes of professionals who address them AND bring to their attention what my neighbors in the Highlands are telling me about.