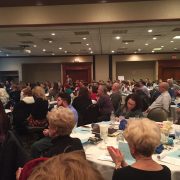 I think I saw a movement start this weekend.

The New Kentucky Project hosted its first Ideas Conference yesterday in Lexington. I’m honored to serve on the Project’s Executive Board, but even insiders had no better expectation than most other attenders what the event would deliver.  We certainly didn’t expect that a sellout crowd of 600 people who didn’t know each other would spend a cold Saturday gathering to remind ourselves that we can build a better future together.

Several speakers captured the day’s theme: new ideas that appeal to people of all stripes because they appeal to universal values, new ideas framed outside the paralyzed and hostile terms of current debates, and new ideas that matter equally to people in rural and urban Kentucky.   Here are a few examples:

We aren’t spending much time talking about these four issues – juvenile justice, opiate addiction, redistricting, and student debt – even though they affect us as much as any of the issues that do distract and divide us.  I’m grateful to these  four leaders, and a host of others, who showed 600 Kentuckians that we can rally around a positive vision for the future and work for it together.

Movements are both exciting and delicate, and it’s too early to know where this one will go. I’m confident that Adam Edelen and Matt Jones (the co-founders of the New Kentucky Prorecognize that this one will succeed only if they let others own it and move it along; I’m excited to support that process. 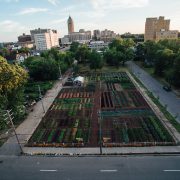 Almost all American cities are asking how they can eat more food that has been grown by farmers who live nearby.  We all want the resulting benefits, from greater food security and an elevated tax base to healthier soil, water and people.  But no American city has yet answered that question, at least not on a large-scale or in a sustainable way.

In cities all over the country there are exciting projects underway, but it’s not always clear which ones are addressing issues in a meaningful and sustainable way.

Our own excitement about the local food movement sometimes results in a lack of clarity about what is actually working – or not.  An added challenge: instead of encouraging each project to succeed on its own terms, people who are passionate about local food sometimes expect individual projects to solve problems they aren’t even trying to tackle.

Recently, a project in Detroit has garnered a lot of attention. The Agrihood is a mixed-use development and neighborhood center built around a 2-acre farm.  Produce from the farm is given away to local non-profits.

The Agrihood is an exciting project, but I don’t completely agree with its self-description as “America’s first sustainable urban agrihood.”  It may be built with “sustainable” products; it may help “sustain” the neighborhood around it; it may even practice “sustainable” agriculture, but it will require ongoing charitable support to survive. It does not make the production of local food a more sustainable business.

One article contends that the Detroit Agrihood might solve a staggering range of problems: “[P]erhaps other communities will look to this agrihood as a model to increase healthy, local food and to solve community problems, like hunger and access to fresh food — all while giving people a greater sense of community and happiness, creating more sustainability for cities, and improving our food system.”

That’s a lot of responsibility to put on one project. Even the Agrihood’s developers don’t claim it will solve all of these problems; they appear focused on using a small urban farm as a tool in responsible development, strengthening one neighborhood in Detroit.  We should let them do just that.

Then there is the fad of Food Halls (as in Chelsea Market in New York or Revival Food Hall in Chicago.)  Because they are often built in gentrifying parts of town that may still include food deserts, some people are asking how food halls will create better access to fresh, local food for their food-insecure neighbors.

A recent article in Civil Eats, for example, asks about a project in Birmingham, Alabama: “Can a New Food Hall Transform a Food Desert?”

What a question. The first goal of a Food Hall is not to transform a Food Desert, but to create a sustainable business.

The director of one Birmingham non-profit also concludes that food hall pricing is a mismatch for food-insecure citizens, but acknowledges that the food hall might encourage more restaurants to buy local, “The different restaurants that farms could connect to at the same time could serve as a unified drop-off point [and might] lower price point hurdles and other time and capacity hurdles that sometimes keep restaurants from buying from local farms.”

This is the right answer.

Local Food Businesses Need to Focus — and we Need to Support Focused Businesses.

Businesses that succeed – and profitability is the ultimate source of sustainability – usually adopt a single business model.  If we want businesses in the local food industry to become sustainable we have to let them focus.  We cannot measure them based on whether they solve the problems of every other business (or non-profit), but based on how they contribute to the overall goal of increasing the amount of food people can buy from regional farmers.

No city will succeed at this goal if we keep confusing projects – asking a neighborhood center to solve hunger, or asking a gourmet food hall to reverse food injustice.  Such confusion (which can sometimes seem like a resistance to shared goals) not only puts those individual businesses at risk, but poses a more serious risk that we might someday look back on this movement to make a better world as nothing more than a fad of early 21st Century America.